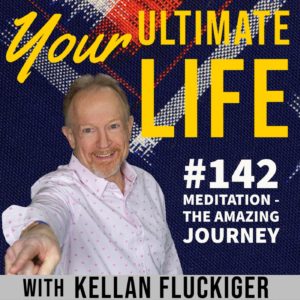 “In meditation practice, the other thing that I needed to learn and was grateful to know is that it didn’t have anything to do with a certain religious practice. In other words, the process of meditation can be used universally across any system of belief.” – Kellan Fluckiger

Listen to more episodes of Your Ultimate Life: your-ultimate-life-by-kellan-fluckiger.simplecast.com

What you are about to learn

The way meditation was not accepted a long time ago than we do today. At that time, meditation was the same thing as it isn’t now. But it was viewed, at least in the circles that Iran is a weird thing that belonged to some Eastern philosophy or religion. I remember having conversations with people about meditation and some that I talked to viewed it as antithetical or contrary to, for example, Christian beliefs. If you are a Christian, you couldn’t do meditation because that belongs to some other kind of religion, practice, and therefore, you are doing something Bad.

For a long time I’ve been practicing, I even wrote a book regarding this which is titled “Meditation – The Amazing Journey Within,” if you are interested to know and curious about it this book is available on amazon. After I started meditating. I did read different things about what it was. And later, I found out that it’s the achievement of a state which is called no-mind. And then it’s called no-mind in some different meditation practices, but no-mind is a state where your mind is empty. There is nothing on your mind at all. And it is in total unity with the universe. In other words, there is no thought occupying any space of your mind that it is empty, and you are just in a state of beingness.

I started with what I used to think it was, which was some practice connected to a particular religion, and then it was some in the unattainable practice of having your mind empty with nothing going on. You don’t have to subscribe to any particular belief system. And you don’t have to be able to empty your mind all at once. I read in some of the books I’ve been reading and I will not going to be detailed about it, is that. One prison tried meditation as an experiment on the prison population. The astounding finding was learning to meditate and practicing it regularly for some time, had a more beneficial effect, and on anything else that they tried by a substantial margin. In other words, nothing else they’d done in terms of reforming the inmates or in terms of reducing violence had anywhere near the impact. It’s only learning to sit quietly and meditate, which is the beginning of what meditation is for those that are new with meditation or at least haven’t done this yet. You can check this on YouTube how it works and finds samples.

What is consciousness? If you think about where your awareness is, it seems like it’s centered somewhere up in your head. Consciousness is portable. If you’re doing those exercises, what you’ll notice is that you are able without difficulty to move your awareness around, and you can move it to other places in your body. And when you do that, everything else just sort of fades out of focus. But as you learn to be aware of to focus on Direct and to use the consciousness that you have in the most potent, advantageous, and beneficial way, you will be astounded. And I call it a fantastic journey. Because most of us haven’t spent very much time alone with our consciousness. We’re busy taking input in what’s going on around us and reacting to things. Learning to be alone and entirely focused on your awareness is a powerful tool to create your ultimate life.

“And so knowing that you can move your awareness and your consciousness anywhere you want to, is a powerful beginning, because your ability to do that is the foundation of your ability to learn to meditate.”

“But you have infinite creativity and your ability to focus your consciousness and focus in focus it intently and completely on one thing at a time is that is a super powerful hack or shortcut or high powered skill that we don’t develop enough. And that is a key to high performance, a key to success, a key to peace, a key to accomplishing great things and all kinds of other things.”

Helpful Reference for you

Meditation – The Amazing Journey Within if in case you are interested, you may get this on Amazon by clicking here

Connect with Kellan on your favorite platforms:

You can find out more about Kellan and how he can help you achieve your ultimate life by checking his website.